Ceres and the Dramatic Story of Triplets Separated at Birth 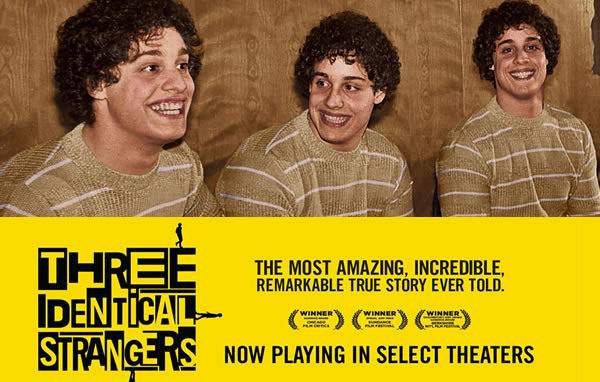 We are now in the midst of the eclipse season summer. During solar eclipses, the dark starry heavens normally obscured by the broad light of day are suddenly and starkly revealed. Uncovering secrets from the past is one of the signatures of eclipses.

A few evenings ago, I witnessed one manifestation of this phenomenon in a viewing of the documentary Three Identical Strangers. This is a mesmerizing story about three identical triplets, separated shortly after birth, adopted by different families, randomly reconnected at the age of 19, and after a joyous reunion, the discovery of dark and disturbing circumstances surrounding their early life.

On June 29, 2018, the film was released for general theater viewing, foreshadowing the solar eclipse on July 12th at 20° Cancer that coincided with their birthday July 12, 1961.  Their story is being brought to light in darkened cinemas across the US.

The triplets were all born within one-half hour of each other and all the brothers have Taurus Ascendant and Taurus Lot of Fortune. Only the chart of the middle birth sibling, David Kellman, is displayed here. There was a fourth sibling who died at birth.

Ceres on the Ascendant of all the brothers stands out as the major celestial influence in this saga, overshadowing their lives with her mythic biography that details the abduction of her child into the Underworld – followed by panic, anger, depression, and eventual reunion.

The infants were given away at birth by their mother but spent their first six months together in an institution in constant proximity. They were adopted by three separate families who were not informed that each child had brothers. As toddlers, all three had severe symptoms of trauma separation leading to struggles with depression throughout their lives. This ultimately led to the suicide of Galland in 1995. Depression following the rupture or separation from a parental/familial relationship is a classic response to grief from loss and subsequent feelings of being unsafe – this is part of the Ceres psychological profile.

The brothers discovered each other by chance and announced their discovery on September 26, 1980. Transiting Ceres was at 17° Cancer conjoining their natal Moon at 13° Cancer and Sun at 19° Cancer located in the third house of siblings, signaling their reunification.

Charismatic and charming, they participated in many media events, amazing audiences with tales of telling similarities in all facets of life. They became exceedingly close and opened a successful Soho restaurant, resonating with Ceres’s theme as goddess of agriculture who fed the people of the world, expressed by their natal Ceres in Taurus in the first house

When they sought to uncover the circumstances of their separation they discovered they had been intentionally separated; given to three families of different socio-economic backgrounds (blue collar, middle class, upper class) as part of a larger scientific experiment to track the development of identical siblings raised in differing environments. The research was conducted under the direction of Austrian-born psychiatrist Peter Neubauer, who had close ties with the Freudian school. His objective was to provide data for the nurture versus nature debate – exploring how different environments affect the development of the individual. The practice of separating twins at birth was ended in New York state in 1980 and this research was never published. Neubauer passed away in 2008. Before his death, he locked away the voluminous records at Yale University and sealed the study until 2066, presumably after all the subjects would have passed away.

Resonance with Ceres and Abduction
In myth, Ceres raged upon learning that her child had been abducted. Her anger at the injustice was followed by a deep depression and inability to grow food to feed the people who went into starvation. Likewise, the triplets responded with anger at the revelation that their separation had been deliberate and their own lives negatively impacted by what they viewed as a diabolical scheme, having been treated “like lab rats.”

Their anger was compounded by frustration at the secrecy, lack of transparency and their inability to access the records of their abusive treatment at the hands of the adoption agency, which could have placed them together had they not had a prior arrangement with the research project.

Eddy Galland had a mental breakdown followed by his suicide on June 16, 1995, as did a number of other separated siblings in the study – symbolically descending with Persephone into the underworld. On the day of his death, the asteroid Persephone was conjunct the Sun and Ceres was passing over the triplets’ natal North Node, activating the karmic axis.

The Film Release and Impact
The chart of the film’s premiere at the Sundance Film Festival contains meaningful contacts to the birth charts of the brothers. Retrograde Ceres conjunct the North Node at 14° Leo squares the triplets’ natal Ceres at 13° Taurus, setting up the dynamic tension concerning revelations of children lost and found. Other contacts between the charts include the film’s Pluto conjunct the brothers’ Capricorn Midheaven, bringing the unethical hidden matter to public view and spurring a collective reaction of outrage. As a result of the exposure and pressures generated from the documentary, Yale has released some heavily redacted records and the brothers have initiated a law suit for compensation.

The film chart’s Sun conjuncts the brothers’ Saturn and the film’s Moon conjuncts their South Node, stirring up old traumas connected to parental abandonment and the travails of orphans. Finally, when the documentary was first premiered at Sundance, the Ascendant at 18° Taurus was crossing over David, Bobby, and Eddy’s own Ascendants and Ceres, symbolically birthing the next chapter in their initiatory descent and rebirth journey.

Beyond the synchronicity of the astrological connections and expressions of Ceres in the lives of individuals, the implications of this story are of particular relevance for the astrological community. It addresses the issue of nature versus nurture, of hereditary versus environment that was the inquiry of the research experiment.  While even ancient astrologers could not deny the influence of environment and social rank upon the interpretation of the nativity, and modern astrologers – in alignment with the Western worldview – hold firm to the influential role of free will, these determinants are but modifications to birth patterns established by genetics and hereditary which are depicted in the natal chart. Astrology is based upon the premise that natal chart signatures pertain to a person’s character over the course of his or her life, which is why the same root chart can be read for a person at youth as well as in old age, even amidst changing external circumstances.

Findings from another twin study, conducted by Viola Bernard during that same period of which Neubauer was aware, confirmed that twins reared apart are not any more different than twins reared together. Perhaps Neubauer not only feared adverse public opinion to his studies, but also may have wanted to suppress his own findings that might challenge a Freudian orientation as to the primacy of “nuture” upon formative child developmental patterns.

I’d love to hear your thoughts in the comments below.

Ceres is hovering about me these days. I have prepared a presentation on her saga in the missing migrant children. This can be found here.