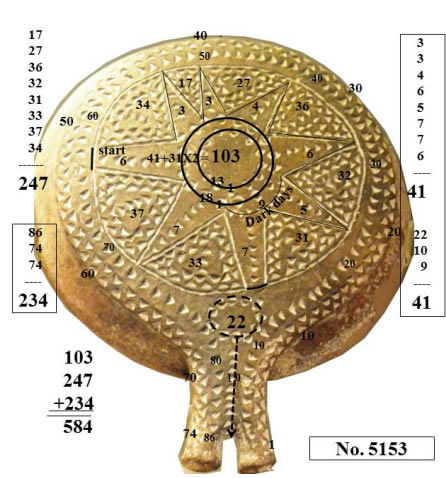 Beginning in the 19th century, over 100 frying-pan shaped vessels that date to 4400 to 2000 BCE have been found on the Cycladic Greek islands and surrounding mainland areas. Until recently, archaeologists could not determine their use and the meanings of their inscriptions. New research suggests that these vessels depict a very advanced calendrical knowledge of the movements of the planets relative to their synodic cycles with the Sun.

This discovery has the potential to completely overturn the accepted chronology that the Greeks were not aware of the astronomical cycles of the planets until after the 6th century BCE when this knowledge was transmitted from Babylonians.  It suggests instead that the Greeks were aware of the periodicities and synodic cycles of the planets more than 2000 years earlier than previously thought. (For more info see: M. Tsikritsis, X. Moussas, and D. Tsikritsis, “Astronomical and Mathematical Knowledge and Calendars During the Early Helladic Era in Aegean ‘Frying Pan’ Vessels,” http://maajournal.com/Issues/2015/Vol15-1/Full13.pdf )

A planet’s synodic cycle is the amount of time it takes between one conjunction with the Sun and the next conjunction as seen from Earth. Various frying pans have grooves corresponding to the number of days of the synodic cycles for each of the planets. Small paint pots were found alongside many of them, suggesting that each day a groove was filled with paint and used as a calendar.

The synodic cycle of Venus is 584 days, with four distinct phases: Venus is visible as a morning star for 263 days and as an evening star for 263 days. She is invisible for 50 days during her superior direct conjunction behind the Sun and for 8 days during her inferior retrograde conjunction when in front of the Sun. 263 days of visibility is equal to 9 lunar months, the length of human gestation. The Venus frying pans may have been used as a pregnancy and birth predictor calculator mirroring the mythological attributes of Venus Aphrodite as a goddess of love and fertility.

The synodic recurrence cyclical periods for each of the planets correspond to the planet’s minor years that were known and used by the Babylonian astronomers and astrologers. The minor years for Venus are 8, Jupiter 12, Mars 15, Sun 19, Mercury 20, Moon 25 and Saturn 30. These numbers are a major component of many Hellenistic time lord procedures. A planet’s significations are said to mature and come to fruition as external events at the completion of their minor years. The minor years of the planets will be fully explained at my forthcoming Hellenistic Astrology Retreat.

The second annual Hellenistic Astrology Retreat will take place October 5-9, 2017, in beautiful Pacific Northwest Portland, Oregon, which is in the shadow zone of the Great American Eclipse. Secrets are revealed under eclipse paths and this retreat will delve into the mysterious and fascinating time lord techniques used by ancient astrologers. We have a full house of participants but there are a few places still open for those of you who want to hone your timing skills to ever deeper levels of insight and understanding.

None of the techniques that we will learn, except Solar Revolutions, involve the use of an ephemeris. The timing mechanisms are built into the intrinsic warp of the fundamental numbers associated with each planet or zodiacal sign. Some are complex, some are simple, but all are profound. Techniques such as Circumambulations and Zodiacal Releasing will stretch your mind into previously unimagined dimensions and others such as Annual Profections involve only counting on your fingers. Timing by Planetary Periods and Ascensional Times of the Signs simply require being able to add numbers whose sums are under 100. Transits were used by the ancients, but only as the final consideration in a hierarchy of other timing procedures that took precedence.

In the extensive work that I have done with the chart of Jacqueline Kennedy Onassis, I was curious about the timing factors that were operative when she successfully gave birth to her first child, after several failed pregnancies. In her natal chart, Jupiter is the lord of her fifth house of children, located in the 8th house of death. In each of the above timing systems that are based upon entirely different constructs, Jupiter was active as a time lord.

One of the basic tenets of Hellenistic timing is that when a planet becomes a time lord, it brings forth the matters it signifies in the natal chart. As a whole, the time lord sequences demarcate the alternating good and bad times, the ups and downs of every life, as they pertain to vitality, material prosperity, profession, and the various house topics of life, such as marriage, children, and health. During the retreat, you will have the opportunity to map out your own time lord chronologies while receiving supervision from myself and my teaching assistant Alecs Garrett.
Registration for this event is due before Sept 5th as that is our deadline for ordering the delicious locally sourced food (with catering for special diets) that will be served for a generous lunch every day.  Contact me if you have any questions.