The Magi, the Nativity, and Epiphany 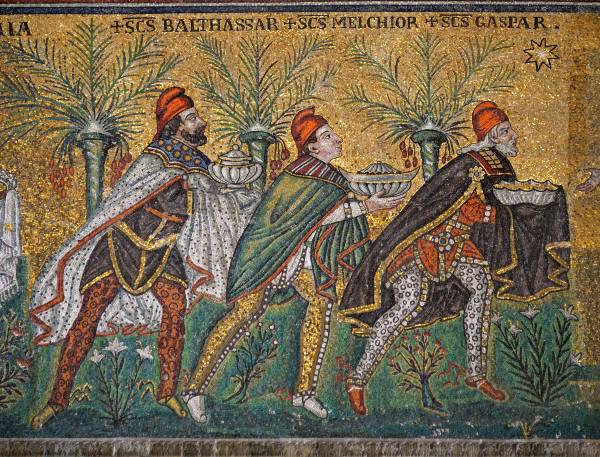 As the Christmas season approaches each year, I want to send remembrances to my friends and family. The search begins for the perfect card that acknowledges my childhood roots in Orthodox Christianity, my vocation in astrology, the members of my community who have non-Christian beliefs, and those who celebrate the sacred nature of this solstice time of year in other ways. After combing through endless card displays of Santa with his reindeers, Christmas trees piled high with gifts, nativity scenes, angels playing celestial harps, winter wonderlands and snowmen, agonizing between the greetings of Merry Christmas and Happy Holidays, I inevitably come home with the Three Magi Following the Star. This image encapsulates it all, and for friends of astrology, it connects us with an important part of our astrological history.

According to the Gospel of Matthew, the Magi, also known as the Three Wise Men or the Three Kings in Christian tradition, were distinguished visitors who came from the East, bearing  gifts of frankincense, gold, and myrrh  to worship a child born under a certain star who was King of the Jews.  In fact Magi was the name of the Persian priesthood from Medea who were well versed in the arts of astrology and magic, having learned this wisdom  from the renowned Chaldean/Babylonian priests when the Persians were the overlords of Babylon in the 6th century BCE. It may well have been the case that they were aware of an upcoming astrological configuration that would presage the birth of a child with a special destiny. They followed the star which, when it stood still, would make a station in the sky and mark the place underneath on earth where the birth would occur. Astrologers have made countless speculations without any definitive consensus as to which specific astronomical event might have corresponded to the Star of Bethlehem and the nativity of Jesus.

By the first century BCE, astrology was becoming popular across the Roman Empire. A particular interest was the identification of notable nativities as credentials for a destiny in rulership as ordained by the stars. A story is recorded that the Roman senator Publius Nigidius Figulus cast the chart of a child born in September of 63 BC and told his father that his newborn son Octavius (the future Augustus) would become “ruler of the world.”  For the rest of his life, the first Roman Emperor Augustus had great faith in his destiny. He used his notable nativity to further and justify his royal ambitions, even issuing a silver coin inscribed with his Moon sign Capricorn.

We can’t help but wonder if the story of the Magi and the Star was an attempt to give the King of the Jews and the Christ-to-be a notable nativity that would rival that of his contemporary Augustus. But the actual facts of the story are not as important as the power of the story to inspire the imagination, touch the heart, and constellate the faith of millions of people over two millennia. And the traces of historical details uncover the role of ancient astrologers to proclaim destiny from the nativity, which is a central feature of the Christmas story.

On January 6th of each year, the Orthodox traditions celebrate the Feast of Epiphany on the Twelfth Day of Christmas, commemorating the visit of the Magi astrologers to the infant Jesus. (The Greek word epiphaneia means manifestation or appearance of a deity.) Here in Eugene, Oregon, where I live, our local astrologers – Christians, Jews, Buddhists, Pagans, atheists – gather each year on the Twelfth Night to celebrate astrology and honor our esteemed lineage of predecessors.

In this spirit, enjoy the carol We Three Kings of Orient Are written by the Rev. John Henry Hopkins, Jr. in 1857 on Youtube here: