Enclosure by Malefics and Benefics – Clinton and Trump 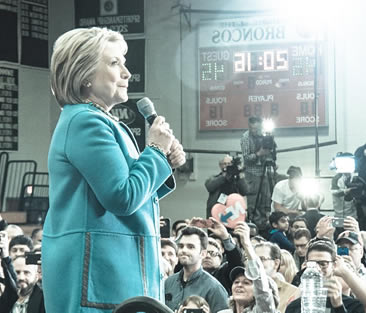 The Hellenistic aspect doctrine contains a section on maltreatment by aspect, where a planet can be severely injured by another planet so that it has difficulty in bringing forth its positive significations. You’ll find an introduction to the concepts in this month’s newsletter as we look at examples in Hillary Clinton’s and Donald Trump’s charts.

Let’s start with an example of one of these maltreatment conditions, called “enclosure by malefics,” in the chart of Hillary Clinton. I use the 8:02 am chart because the newspaper announcement of her birth quoted her mother saying that Hillary was “born in time for breakfast.” The chart is set in whole sign houses, which give a strong angular signature with Sun, Venus, and Mercury in the 1st house and Mars and Saturn (along with Pluto) in the 10th house. [Oct 26, 1947; 8:02 am CST; Chicago, IL]

Hellenistic aspects are understood as the seven visual rays that are emitted by each planet and are directed along the 60, 90, 120, 180 degrees angular slopes. Similar to modern astrology, the trine and sextile rays are sympathetic and the square and opposition rays are harsh. When the malefic planets – Mars or Saturn – are one of the planets involved in the square, opposition (and even conjunction), there is the potential for pain, harm, and injury. We are going to look at one of the seven conditions of maltreatment called enclosure by malefics, which the medieval astrologers referred to as besiegement.

Her Venus (unsteady because of its detriment) in the 1st house of Self speaks to her image as a feminist taking on the daunting challenge of a woman becoming president of the United States and breaking the ultimate glass ceiling. Venus rules the 7th house of marriage and partnership as well as the 12th house of enemies. I wonder to what extent her husband’s foundation (7th) will be the source of the most dangerous accusations against her by her enemies (12th).

Enclosed by the two malefics, Hillary’s Venus is beset by a deluge of negative antagonistic and adversarial forces.

The correlate to enclosure by malefics is enclosure by benefics. This aspect-based condition provides an enhanced protection to planets as it surrounds them with beneficial rays. Many astrologers have been stumped trying to figure out the factors in Donald Trump’s chart that have resulted in his being impervious, at least so far, to the attacks of his enemies. As it turns out, his 12th house Saturn is enclosed by the rays of the benefic planets Venus and Jupiter. Venus at 25° Cancer stands on one side of Saturn at 23° Cancer. Jupiter at 17° Libra sends a square ray to 17° Cancer, on the other side of Saturn. No other planets interpose rays into the interval between 17° Cancer and 25° Cancer that would block this enclosure.

Hellenistic astrology teaches that Saturn rejoices when in the 12th house when in a day chart and masculine diurnal sign, because then it can vanquish its enemies. Because in Trump’s chart Saturn is in the feminine nocturnal sign of Cancer, it does not fulfill the rejoicing conditions. Instead, Saturn, in detriment in Cancer, is in poor condition in the 12th and indicates that the native will be ruined at the hands of his enemies.

The 12th house Saturn in poor condition points to the huge well-funded anti-Trump movement seeking to destroy his candidacy, at the same time that Saturn’s enclosure by the benefics repels the brunt of the attacks. The final outcome will help us to discern which is the stronger of these two factors.