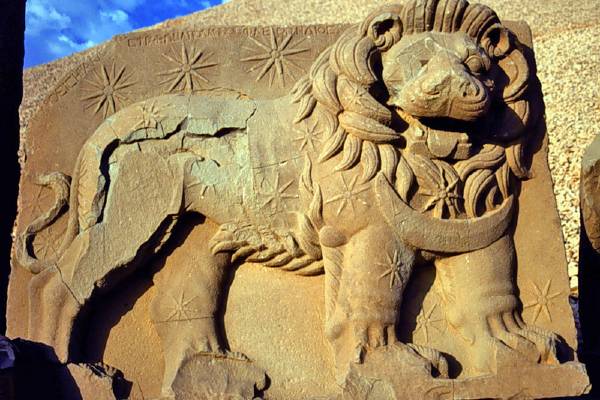 Today (June 30, 2015) we are blessed with a conjoining of the two benefics, the Venusian goddess of love, beauty, and desire with lordly amorous Jupiter and his far-reaching wisdom and justice. In 2015 this conjunction marks the legalization of same-sex marriage. In ancient astrology, fortunate fertile prosperous noble marriages that give birth to good children are among the significations of the co-mingling of these two planetary deities.

The astrological community is no doubt initiating all sorts of auspicious events today under this fortuitous electional day, including many long-awaited marriages around the nation. But I want to tell you about another Venus-Jupiter conjunction in Leo that occurred over two thousand years ago whose marital blessings showered upon the lives of several illustrious ancient astrologers who are the ancestors of our tradition.

On top of the 7000-foot mountain peak Nimrud-Dag in south-west Turkey there stands a large monumental stone carving commemorating the coronation of King Antiochus I of Commagene in the summer of 62 BCE. A lion is portrayed marching to the right whose body is marked by the 19 stars of the regal Leo constellation as described in the ancient star table of the Greek astronomer Eratosthenes. The lion is adorned with a crescent moon neckband, bejeweled with the royal star Regulus. Depictions of a stellium of planets in Leo including Jupiter and Venus are splayed across the lion’s back.

This sculptural relief is considered to be the earliest Greek “horoscope” erected to call down the blessings of the heavens on a new dynasty of Hellenistic Greek kings in Asia Minor – kings who had astrological interests. Antiochus I laid the basis for a calendrical reform to the Sothic (star of Sirius) used by the Egyptians and was knowledgeable in Hermetic astrology.

Possible Chart for a grand Leo day in the summer of 62 BCE:

King Antiochus I’s patronage of astrology was furthered by the marriage of his granddaughter – the princess Aka – to the renowned astrologer and Platonic philosopher Thrasyllus, lifelong friend and advisor to Emperor Tiberius. That Thrasyllus, an itinerant Alexandrian Greek astrologer, was given Roman citizenship and awarded a royal princess for a bride, is a testimony to the beneficence of Venus and Jupiter inaugurating the Commagenean dynasty of astrological aficionados.

Thrasyllus’ granddaughter Ennia Thrasylla, likewise benefited by marrying a Roman knight who became the Tiberius’ right hand in ruling Rome, and mistress to the next would be Emperor Gaius Caligula, assisting in his succession to the throne. Thrasyllus’ son Balbillus, a very influential astrologer to the Roman emperors Claudius, Nero, and Vespasian, had a daughter who married back into the royal Commagene family. Her son Philopappos, retaining the title of king, followed his great grandfather’s intellectual interests, held the office of archon in Athens and was elevated to consulship. His mausoleum has become a famous well-preserved landmark in Athens, atop the Hill of the Muses, opposite the Acropolis.

From the Venus-Jupiter conjunction in Leo at the summit of Nimrud-Dag to the Monument of Philopappos crowning the Athenian Hill of Muses, the energies of love and wisdom intermingled to give great good fortune, honor and nobility to a family of astrologers who were influential in shaping the politics of the early Roman Empire.

A wish is sent with this newsletter that each of you conceive and embrace a great dream on this day whose fruits will flourish through your generations.

Thrasyllus, a Hellenistic astrologer and Platonic philosopher was lifelong friend, teacher, and advisor to Emperor Tiberius. Learn how he brought astrology from Egypt to Rome, transmitted his knowledge to the circle of poets and scholars in Augustus’ court, and played a critical role in influencing the power and politics of the early Empire.