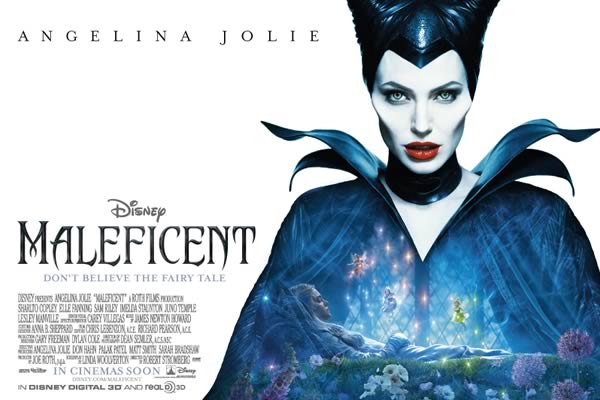 When films, or any piece of theater or art, reflect archetypal themes derived from myth or fairy tales, they can have a universal appeal and evoke a catharsis in the observer.  Arising from Jung’s ‘collective unconscious,’ these motifs speak to the resolutions of the dramas of the human condition.  Many Asclepian healing sanctuaries in antiquity contained Theatres of Dionysos, which suggests that viewing the timeless Greek tragedies was part of the healing cure.

Maleficient, starring Angelina Jolie in a critically acclaimed performance, is “the untold story of Disney’s most iconic villain from the 1959 classic Sleeping Beauty.” A beautiful, pure-hearted young woman with stunning black wings, Maleficent has an idyllic life growing up in a peaceable forest kingdom, until one day when an invading army of humans threatens the harmony of the land. Maleficent rises to be the land’s fiercest protector, but she ultimately suffers a ruthless betrayal – an act that begins to turn her pure heart to stone. Bent on revenge, Maleficent faces an epic battle with the king of the humans and, as a result, places a curse upon his newborn infant Aurora. As the child grows, Maleficent realizes that Aurora holds the key to peace in the kingdom – and to Maleficent’s true happiness as well.

This most recent version retells the tale of Sleeping Beauty from the perspective of the ‘bad fairy’ who is ultimately redeemed in a way that is a collage of several ancient Greek myths.

In this film we see Stephan  – as the aspiring hero who steals Maleficient’s magic wings under the guise of romance – as similar to the Greek hero Jason, who enters the enchanted kingdom on the shores of the Black Sea, woos the princess Medea, steals her magical Golden Fleece, and then betrays her. Jason provokes Medea’s rage and she exacts revenge by killing his children.

We also see the bad fairy Maleficient  is re-imagined as Eris, goddess of strife, discord, contention and rivalry, when  not invited to the wedding feast, crashes the celebration and retaliates by throwing the Golden Apple into the crowd which incites the events that lead to the Trojan War. And finally the princess Aurora who is cursed to prick her finger upon the spinning wheel of the fates and falls into a sleep of death until kissed by true love is reminiscent of the Apuleius’ 2nd century AD story of Psyche and Eros.

From an astrological point of view there is a fascinating and startling correlation between the celestial bodies associated with the myths and the charts of both Angelina Jolie and that of the movie’s premiere. We might speculate that the more an actor or actress’s chart reflect the themes of the role, the more authentic and compelling the portrayal of the character.

Tony Howard has written an excellent analysis of Maleficient using the chart of the movie’s premiere. In this article I want to look primarily at Angelina Jolie’s chart.

The Malefics and Eris

Let’s begin with a ‘traditional’ approach before moving on to the amazing asteroids. Is there anything in Angelina’s chart that would allow her to embody the fierce beautiful warrior princess Maleficient? Angelina has the malefic Saturn at 17° Cancer rising in her first house, conjunct Venus, the goddess of beauty. She also has the asteroids Amazone at 18° Cancer and Xenia 16° Cancer, both legendary female warriors.

The ruler of her Cancer Ascendant is the Moon at 13° Aries, conjunct to the other malefic, a powerful 10th house Mars at 10° Aries. What is stunning is that the trans-plutonian dwarf planet Eris is conjunct the Moon to the exact degree.

Maleficient’s character is derived from Eris, and Angelina perfectly embodies Eris via the conjoining of this archetypal goddess to the most personal planet in her chart. Furthermore, the asteroid Tisiphone, one of the Furies, whose name means retaliation, is conjunct the 29° Cancer Ascendant within a degree. In the first broad brush-stokes of assessing character with the 1st house and Ascendant ruler, the power places are occupied by the uninvited bad fairy who takes on the mantle of the warrior queen and retaliates betrayal and insult with a curse and a war. Notice the wings bearing these goddesses and relook at Maleficient’s wings above.

The film’s premiere chart reflects these same themes with Saturn, one of the malefics, again in the 1st house; Saturn in Scorpio portraying the rage of betrayal that motivates Maleficient. The other malefic, Mars, is the ruler of chart’s Scorpio Ascendant, placed in the 12th house of secret enemies and conjunct the asteroid Asmodeus, King of the Demons, whose image mirrors those of Maleficient’s  army of demonic warriors.

We also see the asteroid Lilith squaring the Ascendant from the M.C. of this chart. Lilith was  a Hebrew temptress (and Adams’ first wife who later consorted with demons) who was derived from a Mesopotamian class of winged demons who screeched like night-owls, and even farther back as a handmaiden of the Sumerian goddess Inanna cast out of the Garden by Gilgamesh. The demonic images connected with the Ascendant ruler and the Mid-heaven symbolizes the fearsome shadow projections of the humans upon the inhabitants of Maleficient’s enchanted kingdom against whom they battle.  And in these classic images, we see more wings…

In the premiere chart, the asteroids Amazone and Eris are conjunct the South Node in Aries (Angelina’s Moon/Mars sign) and squared by Xenia in Cancer (her Ascendant sign). They pick up the theme depicted in Angelina’s chart as the forces of counterattack.

Another set of stunning correspondences in Angelina’s chart are portrayed by additional winged goddess asteroids. Maleficient’s black witchy cloak is reinvented as a set of magnificent wings which allow her to soar in delight and vanquish her enemies. She also bears two huge horns. This image is reminiscent of the winged and horned Egyptian goddess Isis. The asteroid Isis at 19° Aries is conjunct Angelina’s M.C. at 17° Aries, the most publically prominent point in the chart.

Another winged figure in Angelina’s chart is the asteroid Nyctimene at 12° Gemini conjunct her Sun at 13° Gemini. As told by the Roman poet Ovid, Nyctimene was a princess of Lesbos who was seduced by her father; ashamed, she hid in the woods and Athena, taking pity, transformed her into an owl. The Sun is also borne by its conjunction with the asteroid Zephyr, the god of the West Wind.

In addition to winged goddesses on her Mid-heaven and Sun, we see the most sensitive Ascendant degree occupied by the asteroid Sirene at 29° Cancer. The Sirens are best known from the Odyssey  as prophetic bird-women who lived on craggy rocks in the sea. Their melodious voices enchanted the sailors passing by, luring them to their deaths.

It is the theme of redemption that makes this telling of Sleeping Beauty unique and life-affirming for the dark feminine. Maleficient comes to love and befriend the child princess that she has cursed. And, it is Maleficient’s kiss of true love that awakens the sleeping Aurora, thereby saving her. Can we see this potential for transformation of the bad into good in this set of charts?

In Angelina’s chart, the Moon is separating from malefic Mars and applying to benefic Jupiter. A traditional interpretation would read that she (Moon ruling her Ascendant) is leaving behind a contentious past (Mars) and moving toward a beneficient future (Jupiter). This potential is confirmed in the premiere’s chart where an exalted Jupiter in Cancer exactly conjuncts the asteroid Angelina at 19° Cancer. And at the time of the movie’s premiere, it was transiting over Angelina’s natal Saturn at 17° Cancer, pacifying the natal malefic vulnerability by replacing it with love.

In the Eumenides, the third play in the ancient Greek Oresteia tragedy  by Aeschylus which was often performed in the healing sanctuaries, Tisiphone and her sister Furies lay aside their anger and become transformed into the ‘Kindly Ones’. One might say that it was ‘in the stars’ for Angelina Jolie to play the role of Maleficient.

Working with the Asteroid Goddesses

Demetra presents a hands-on workshop to show you how to choose which asteroids to work with and how to incorporate them into a reading. Learn how to start working with each of the major asteroid goddess archetypes, using the charts of two audience members who also share feedback.