Moonlight, Chiron, and the Solar Eclipses 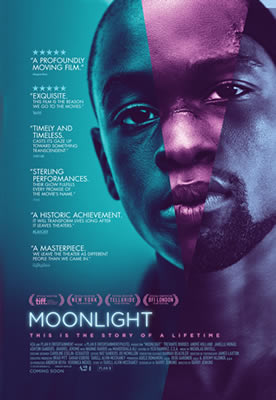 A warm hello to everyone for the Spring Equinox this month, a time that ushers in dynamic fresh warming breezes and Persephone’s annual rebirth witnessed by the appearance of crocuses and daffodils sprouting from the cold winter earth. I am still immersed in finishing my workbook on ancient astrology, but before too much time had gone by, I wanted to share my observations concerning Moonlight, the film that won this year’s Academy Award 2017 for best motion picture.

Tony Howard has suggested that the chart of a movie can be taken from the time of its premiere showing. A recent conversation with Keith Murray asking what I thought about the significance of Chiron as the name of the main character in Moonlight reminded me that I had wanted to explore this symbolism in the astrological charts of the film and the actors.  I have long felt that artistic creations that resonate strongly with the collective express some universal archetype and the chart of the film is one way to access its deeper significance.

Look at the following chart for Moonlight’s world premiere showing on Sept 2, 2016 at 8pm at the Telluride Film Festival in Colorado (whole sign houses). The presence of Chiron on the Ascendant within 2 degrees of orb is a striking testimony to the power that the names of celestial bodies that mark prominent positions in the chart have in shaping the story that is told.

In Greek mythology, the Centaur Chiron was depicted as a half-human, half-horse hybrid creature. He was rejected by his father Saturn as an illegitimate bastard, abandoned immediately after birth by his mother Philyra, then found and fostered by Apollo. As an adult, Chiron was known as the kind wise teacher and foster parent who took many Greek youths into his home in a cave on the summit of Mt. Pelion where he raised and educated them, especially in the healing arts. Suffering from unhealable wounds himself, he became the embodiment of the archetype of the wounded healer.

The film Moonlight tells the story of a withdrawn gay black youth named Chiron – fatherless, emotionally abused by his crack-addicted mother, and tortured by a pack of bullies. Juan, a drug dealer, finds Chiron in an abandoned crack house, brings him to a safe place at the home of his girlfriend, spends time with him, teaches him how to swim, gives advice on how to make his way in life, and reassures him that it’s okay to be gay. The two poles of the archetype of mythic Chiron, youth and sage, is held by the two main characters in this movie, the young abandoned boy and the older mentor.

The time-sensitive Ascendant and Midheaven degrees are the most dynamically charged points of a chart. At Moonlight’s premiere, Chiron at 23° Pisces was rising and in a partile trine to the asteroid Apollo at 23° Cancer. Apollo was Chiron’s mythological foster parent and savior; this aspect reflects the relationship between these two figures in the myth. The asteroid Mahakala, a black powerful wrathful protector god in Hindu and Buddhist pantheons, was on the Midheaven – the peak of honors and recognition – within one degree (26° Sagittarius). Now, I acknowledge that this next statement might be stretching the story. Juan as the older Chiron figure was portrayed in the movie by Mahershala Ali and he won the best supporting actor award for this role. The late Jacob Schwartz, the most brilliant of all the asteroid researchers, contended that an asteroid name that “sounds like” works. Take a moment to say aloud several times Mahakala and Mahershala.

As I was looking at this chart of the premiere and saw that the Sun was conjunct the North Node and that the Moon was nearby, I realized that this must have been near an eclipse. Indeed, the solar eclipse occurred the day before, on September 1 at 9° Virgo. The interplay of light and dark shadows characterizes the visual phenomena of eclipses, and the cinematography of Moonlight was a study of this chiaroscuro effect of light and shade. Eclipses portend fated events, the revelations of secrets, and sudden unexpected reversals. The events that take place on eclipses have a destiny that is carried forward in time.

The Academy Award presentation occurred six months later on the companion eclipse at 8 Pisces on February 26, 2017.

During the live ceremony, the film La La Land was mistakenly given the final award for best picture at first. But in a sudden dramatic reversal of fortune, Moonlight was proclaimed the real winner, fulfilling its eclipse destiny portended at its premiere. Note how Chiron, which had been at 23° Pisces retrograde in the premiere chart, traveled back to 20° Pisces in the interval between the eclipses and then returned to its same degree at 23° Pisces in the award chart. It also reiterated its partile trine to the asteroid Apollo at 23° Cancer, which in the interval had traveled forward into Leo and then retrograded back exactly to its premiere position.

Mahershala Ali (February 16, 1974, Oakland, CA) has natal Chiron at 17° Aries. At the moment that Moonlight was awarded the Oscar for best motion picture, the transiting Descendant of the Award chart was conjoining Mahershala Ali’s natal Chiron. The eclipse destiny of his name on the Midheaven of the premiere chart was also fulfilled in this moment.

I’d like to think that the archetypal Centaur was well pleased with the honors accorded to him as the presiding deity of the eclipse movie Moonlight.