The Temple of Apollo – AND Diana 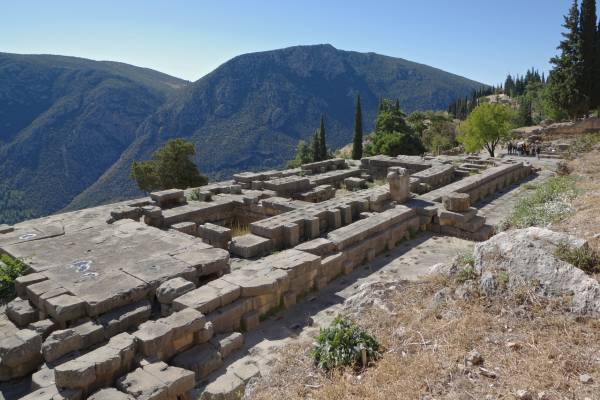 I have recently returned from my travels in Istanbul, Turkey and southern Italy. One of the greatest joys of a life in astrology has been meeting with members of the international community of astrologers, and experiencing the kindness, enthusiasm, and wisdom of people everywhere who love astrology.

Right now I am busy preparing the next webinar on the Third House: Goddess which we’ll present on Saturday, November 16th. I’ll be including the insights that arose while I was visiting the archaeological site of Cuma on the Bay of Naples with my friend and former student professional art historian Surjeet Anna who lives in Sorrento. This site has long been associated with the subterranean cave of Cumean Sibyl, a prophetess who appears in Vergil’s Aeneid.

Anna suggested that some think that the sibyl’s grotto might be on the shores of nearby Lake Avernus, an entrance to the underworld. However, the ‘revelation’ occurred while climbing up to the temple of Sun god Apollo, where recent excavations have uncovered evidence of divination upon the hilltop (it was Apollo who transmitted prophetic inspirations to the sibyls). Right beneath Apollo’s temple is a sanctuary now confirmed as dedicated to the Roman Moon goddess Diana, mythic twin sister of Apollo, on the Full Moon of Aug 13, 21 BC. The Moon Goddess is the Lady and Queen of the astrological third house.

Ancient astrological texts contain scattered references associating the third house not only with siblings and short journeys, but also naming it “Goddess” and linking it to religious observances, divination, and the rejoicing place of the Moon. Most of these spiritual significations, and even the memory of its name, have dropped out of the transmission process to modern astrology. However this is what I will emphasize in the webinar, reclaiming the feminine-based lunar spirituality of the 3rd house, Goddess in apposition to the solar-based theology of the 9th house named God.

For those who have wondered where the goddess was in Hellenistic astrology, we’ll approach her throne next week in the third place where she has always been. I hope you’ll join us for a provocative session that is sure to ruffle some feathers, on the wings of the dove so to speak.

P.S., in a previous newsletter on Edward Snowden as messenger of truth, I wrote that the November Solar Eclipse at 11 Scorpio on his 6th house Moon in Scorpio would bring him difficulty. On that day I read in the New York Times that his request to the US for clemency was denied. That keeps him in bondage and subjugation in Russia, reflecting the ancient 6th house signification of slavery.

Explore the many dimensions of the third house. Along with siblings and short journeys, ancient astrologers placed divination and religious rites in the third house under the auspices of the Goddess.

Explore the many dimensions of the second house. In this pre-recorded webinar, Demetra explores ancient and modern perspectives all about money and livelihood: how we make it, spend it, lose it; how we hope for more of it. How our relationship with money underlies our self-worth and reflects our values. Supplementary topics for this presentation include relative angularity and interpretation guidelines using the charts of Jacqueline Kennedy Onassis and Maria von Trapp.