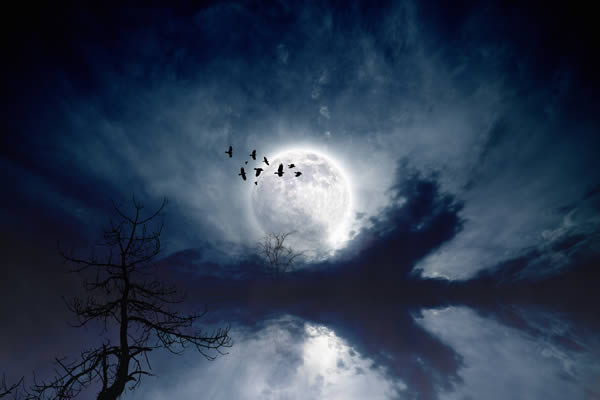 Since ancient times the Moon has been worshipped as the Queen of the Night. Dating to at least 35,000 years ago, artifacts from the upper Paleolithic era, consisting of sequences of notches carved into bone, stone, and ivory are thought to be the earliest lunar phase calendars. By gazing at the Moon and tracking her phases, early peoples regulated their lives according to lunar rhythms. They watched the Moon change place, color, shape, disappear and reappear each month. She gradually unfolded from a slim silvery waxing crescent, increasing in light until she was totally illuminated at the full Moon, and then decreasing in light until she became altogether invisible at the dark of the Moon.

The phases of the Moon are not simply a manifestation of the Moon herself, but rather a display of the changing relationship between the Sun and Moon as the Moon circle the earth each month. They reflect the pattern of her increasing and decreasing light as she separates from the Sun and then returns back to him, and in that process tapping out the rhythm of how it is that life is created, sustained, and renewed.

Various cultural traditions have divided the Moon’s cycle by three (new, full, dark), four (new, first-quarter, full, last-quarter), eight (new, crescent, first-quarter, gibbous, full, disseminating, last-quarter, balsamic), twenty-seven (Hindu nakshatras), and twenty-eight (days of the lunar month). The eight-fold cycle of transformation as seen in the in the increasing and decreasing light of the Moon’s monthly cycle is also evident in the increasing and decreasing light of the yearly solar seasonal cycles, marked by the solstices, equinoxes, and cross-quarter days. The lunation cycle as a whole describes the various qualities of energies that comprise the successive stages of any organic life process of coming to be and passing away. In Dane Rudhyar’s seminal work in 1936 on the lunation phases, he used the metaphor of the growth of a plant to illuminate the successive stages of growth symbolized by the phases of the lunation cycle.

We are each born during a particular phase of the Moon, as determined by the angle of separation between the Sun and Moon at the moment of our birth. In terms of personality functions and types, each person reflects the characteristics of the phase of cyclic process during which he or she was born. The phase signifies the kind of energy that flows between our solar consciousness and lunar instinctive awareness, and indicates the quality of interactive energy that we can best use to express (Sun) and actualize (Moon) our life purpose. Our lunation phase also points to current stage of our soul’s development within a larger cyclic process.

New Moon Phase
The Moon is 0 to 45 degrees ahead of the Sun. The first phase of cyclic process is depicted by the birth of the light at both the New Moon and the Winter Solstice (Yule). The process begins when the seed, containing a new vision infused with an intention, breaks free from its capsule and germinates in the darkness. At this first stage the evolving soul initiates a new cycle of experience by incarnating into a body, allowing a subjective sense of new possibilities to surface, and projecting an identity into the world. The energy emerges out of the void and projects itself forward.

Crescent Moon Phase
The Moon is 45 to 90 degrees ahead of the Sun. The second phase of cyclic process signified by the Crescent Moon is analogous to the cross-quarter day of Candlemas (Imbolc) February 2nd when the light quickens. Now the first tender shoots of this vision have struggled against the force of gravity to push themselves above the ground. At this second stage the evolving soul is enfolded with matter and likewise struggles to overcome the backward pull of the past in order to move forward. It must claim possession of the body, gradually focus its vision, and develop new talents and skills. The flow of energy at this stage of cyclic process is a confrontation against resistance and inertia, trying to push through it and establish one’s fledging identity.

First-Quarter Phase
The Moon is 90 to 135 degrees ahead of the sun. The third phase of cyclic process is depicted by the First-Quarter Moon when there is an equal amount of light and dark, corresponding to the Spring Equinox (Oestarra) and there is a balance between daylight and nighttime hours. Now the light force steadily increases. At this stage the plant sends its roots downward and its stem and leaves upward, creating a strong structural foundation to support the flower and fruit that is yet to come. The life force of the evolving soul activates the personality by taking direct action to anchor the vision and build a similar structural foundation to support the larger purpose that is yet to be revealed. The flow of energy is forceful and direct, clearing away obstacles in order to build strong forms.

Gibbous Moon Phase
The Moon is 135 to 180 degrees ahead of the Sun. The fourth phase of cyclic process represented by the Gibbous Moon corresponds to the seasonal cross-quarter day of Beltane (Mayday) when the light force is rapidly increasing. Our daylight hours are getting longer, and we see the Moon swelling towards her fullness. At this stage the plant is putting forth buds with the promise and expectation of the flower that will bloom. The evolving soul looks back to the structures it has created in order to evaluate and improve upon them. The flow of energy is geared toward analyzing ones expression, finding ways of perfecting one’s structures so they can be worthy containers of the coming meaning, and integrating them into the reality of the environment so they can be of practical use to others.

Full Moon Phase
The Moon is 180 to 135 degrees behind the Sun. The light peaks at the fifth phase of cyclic process shown by the maximum amount of reflected light at the full Moon phase and the longest hours of daylight at the Summer Solstice (Midsummer, Litha). Now, halfway around the lunation cycle, the flower opens and blooms. The vision is fully illuminated and the evolving soul becomes ‘conscious,’ clearly seeing its purpose, and beginning to infuse the meaning of its life into the structures that were initiated, built and perfected during the first four incarnations. In the same way that the flower has to be pollinated in order to bear fruit, the soul at the full Moon phase must open itself to receive someone or something from outside itself into itself in order to fertilize the cycle and bear the fruit.

Disseminating Moon Phase
The Moon is 135 to 90 degrees behind the Sun. The sixth phase of cyclic process opens at the Disseminating Moon, when the Moon is still full but the first stirrings of darkness begin to occur. This corresponds to the seasonal cross-quarter day of Lammas (Lughnasadh) on August 1st when the daylight hours begin to shorten. The flower begins to fold in upon itself as it forms the fruit. This stage marks the apex or fruition of the cycle when the vision is acted upon and lived out through the lives of humanity, thereby fulfilling its purpose. The evolving soul embodies this meaning and lives out its purpose, spreading what it has found to be of value and conveying its message and vision.

Last-Quarter Moon Phase
The Moon is 90 to 45 degrees behind the Sun. This seventh phase of cyclic process is marked by half light/half dark. The Last Quarter (also called the Third Quarter or Waning Crescent) Moon mirrors the time of the Fall Equinox (Mabon) when daylight and nighttime hours are once again in balance. The natural dark force of nature begins to gain. In the plant cycle, the crop is harvested and whatever has been realized throughout the cycle is ingested and assimilated. The fruit that is left on the vine begins to wither and decompose. Once the purpose of the cycle has been fulfilled, the deconstruction process begins. What was built up must now be broken down. The evolving soul begins to revise its thinking, based on the new awareness gained from the previous phases, and it begins to reject limiting belief systems, re-evaluating and reorganizing its ideology. The flow of energy turns away from the old and begins to reorient to intimations of the future.

Balsamic Moon Phase
The Moon is 45 to 90 degrees behind the Sun. The eighth and final stage of cyclic process is symbolized by the waning Balsamic Moon dissolving into darkness. The cross-quarter seasonal holiday of Halloween (Samhain) on October 31st also ushers in the shortest days of sunlight as the dark force triumphs. In the plant cycle the seed is released from the old fruit and is buried underground in the depth of the dark. The evolving soul likewise distills the wisdom essence of the past cycle and intuits the visions of the future, creating seed capsules that will generate at the next New Moon phase. The flow of energy is to withdraw deep inside oneself, releasing, purifying, healing, regenerating, and preparing to be reborn.

Lifetime Lunar Phases
We are born into one particular lunation phase, and the major part of our awareness operates with this kind of energy. However life is not a static process. A timing system in astrology called secondary progressions measures the movement of the planets in the days after our birth, and it symbolizes the unfolding of our birth potential over time. Every thirty years, we symbolically move through the entire lunation cycle, experiencing the qualities of each phase for about four year intervals. The meanings of the events that take place during each progressed phase mirror the qualities of the kinds of energy flowing at that stage of cyclic process. From this perspective we can view the entirety of our lives as several thirty-year cycles, which will occur at different ages for each person, of beginnings, culminations, and endings, and renewals of our evolving life purpose.

More detailed information on the lunation can be found in:

Books: Finding Our Way through the Dark

MP3 Audio: Mysteries of the Dark Moon & Finding Our Way through the Dark