Gaia Disrupted with Uranus in Taurus 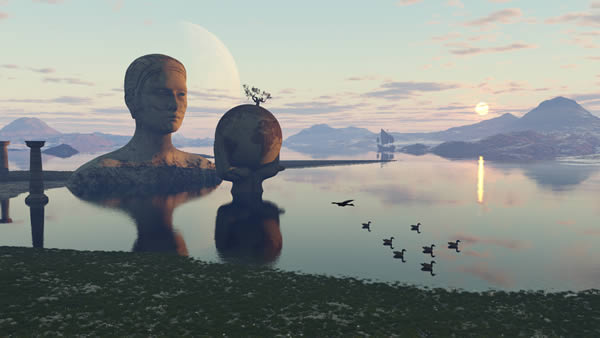 Uranus’ entry into Taurus is the big celestial event of the season that sets a tone for the next seven years. The planet steps into this earth sign accompanied by Mercury on May 15, just hours after a Taurus New Moon (view the chart). And it trines a stellium of planets in Capricorn. Ancient myth can give us some insights into what astrologers are describing as the planet that brings the biggest changes occupying the sign that is the most resistant to change.

Ouranos stands at the very beginning of many creation myths. According to the Theogony written by the poet Hesiod in the 8th century BCE, he is the God of Sky, envisioned as a solid brass dome decorated with stars. Each night he would lay over the reclining Earth Goddess Gaia, embodiment of Taurus. She gave birth to the mountains, sea, and the first race of gods called the Titans. Gaia then bore the Cyclops, the Giants, and the Hundred-handed Monsters all of whom Ouranos hated. He pushed his children back into Gaia’s body, refusing to let them see the light of day.

Earth groaned with pain and bid her youngest son wily Saturn who despised his lusty father to exact revenge. She gave him an iron sickle and when Ouranus came at night longing for love and spread himself over Gaia, Saturn castrated him. From the drops of blood fell that fell upon Earth there arose the Erinyes, the three serpent-clad Furies named Alekto, Megaira, and Tisiphone who hence pursued wrongdoers by driving them to insanity. The crimes that particularly summoned them were those against the parents, the elderly, and the vulnerable, and violation of the law of hospitality to strangers.

Uranus will soon penetrate Taurus once again; Earth will crack open and awaken the avenging Furies.  The environment will become the next focal point of the Uranian energies. We will enter into an era of sudden disruptive shocks to the biosphere, precipitating earth and climate changes that can no longer be ignored or tolerated. Opportunists who violate the environment and her fragile ecosystems will accelerate their attack. The ancient Furies will shape shift into a mass protest led by environmental activists who will hound those who have committed crimes against Earth. Heed the call to protect the mother of all living things and those who lives depend upon her.

On the day that Uranus enters Taurus, the asteroid Gaia will be at 23 Aries conjunct Eris, the sister of Mars and goddess of war. Within two weeks asteroid Gaia will conjoin Uranus in the 1st degree of Taurus, seeding the events of his sojourn through the sign. At that time the Fury asteroids Alekto (22 Aries), Tisiphone (16 Cancer), Megaira (19 Cancer), Erynia (17 Libra) will form a grand cardinal cross with Pluto (21 Capricorn). The time of reckoning will begin.

On a personal psychological level, look to the house in your chart occupied by the sign Taurus. This topic symbolizes the area where currently you may be most stuck, blocked, habituated, and resistant to change. Expect disruptions to business as usual in this area of your life. Open yourself to the forces of change and liberation.