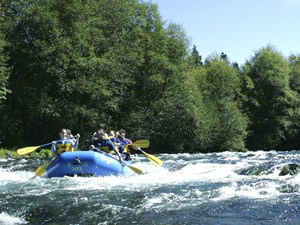 We’ve now arrived at the halfway point between Summer Solstice and Fall Equinox. While we are still in the midst of summer, our thoughts are beginning to stretch ahead into what the fall season has in wait for us.

And speaking of the fall season, mark the weekend of November 2-4, 2012 for the Jeffrey Wolf Green Evolutionary Astrology Conference, where I will present again this year. The conference was very successful last year, and will take place again at the Still Mountain Conference and Retreat Center near Portland, Oregon. The early registration price is available until August 15th. I’ll present an asteroid lecture on The Sacred Marriage: Vesta, Juno, and Psyche. This talk will be a modern update of material I presented a few UAC’s back, in a talk titled Venus, Vesta and Juno.

The Guide on the Journey

Yesterday, as part of my post-birthday celebration, I went on a rafting trip along the scenic and wild rapids of the nearby McKenzie River. While on that adventure, I was inspired as to how to write this newsletter. It is all about the guide on the journey. This was my first river rafting experience of this level, and I was happy indeed to hear that our seasoned guide has been navigating these waters for 35 years.

Let’s take a look at which planetary archetype is guiding the journey for our two presidential candidates, Barack Obama and Mitt Romney.

As many of you know, this past year I’ve primarily focused upon presenting the most fundamental principles of traditional astrology to astrological audiences, and gave the best distillation and synthesis to date in the 7-hour pre-conference intensive at Norwac in April which I’ll summarize for you here.

Knowing how to evaluate a planet’s condition is the first step to truly understanding how to then interpret its meaning in the natal chart. When assessing a planet’s condition, we are trying to understand that planet’s capacity to guide the individual to making choices that result in fortunate and positive outcomes in the life. Then we can see the planet as a descriptor of character and overseer of the topics of life, such as marriage, health, children, or finances.

A planet’s natal condition is also the key factor in prediction when that planet becomes activated in timing procedures such annual profections, progressions, transits, solar returns, and other time lord techniques.

In the NORWAC talk, we looked at the charts the US’s two presidential candidates Barack Obama and Mitt Romney, and focused our attention on the planet that rules each of their Ascendant signs. Hellenistic astrologers called the Ascendant the Helm, implying that it was like the steering wheel of the ship that carries us to our destination. The planetary domicile lord of the Ascendant can be compared to the Steersman of our life journey. How qualified and capable is our rafting guide, steering us through the rapids so we actually arrive at the end of our intended journey, safe, successful, and happy?

In Obama’s chart, Saturn, as the traditional domicile lord of his Aquarian Ascendant, holds the role of steersman; while Romney has Mercury, ruler of his Gemini Ascendant, as his guide.

We then subjected these two planets to more than thirty different criteria, each of which yielded some kind of information as the planet’s potential to guide the individual to a successful arrival at their destination/destiny. Our criteria included: malefic/benefic predispositions, sect, sect-mates, sect rejoicing conditions, four different kinds of rulerships powers, aspect modifications, speed, visibility, direction, and house factors. At the end of the workshop, the participants were asked to give each planet a grade as to how well it was equipped to do its job as guide. They gave Obama’s Saturn a ‘B minus’ and Romney’s Mercury a ‘C’ or maybe ‘C plus,’ concluding that Obama had a very slight edge over Romney in his capacity to steer the ship.

What the process revealed is that Obama’s agenda, with Saturn in the 12th house, is steered by the topic of secret enemies. His advocacy and use of Drone Warfare is a larger factor in his presidency than seems obvious at first glance, and it begs the question of secret enemies at home as well as abroad. While his Saturn in Capricorn is strong in some respects, it also has a number of difficulties, and it is not at all clear if he can be victorious over his hidden foes in the end.

Romney’s Mercury placed in the 10th house and also ruling 4th, points to how he is steered by the vision of public prominence and position, which is partly motivated by wanting to continue and surpass his father’s aspirations. But the class judged his Mercurial guide to be quite ineffective (due to its detriment, invisible status, and retrograde direction for starters). And the help Romney’s Mercury does have comes from the assets of others in a round-about manner. At that time we had already witnessed his verbal gaffes such as “I am not worried about the poor” and “My wife has two Cadillacs.” But this past week we saw this verbal ineptitude on display on the international scene as the British government and tabloids were outraged and insulted by his remarks that they might not be ready for the Olympics.

This analysis is not about who will win the election, but rather an insight into the relative ability of each person to steer one’s life towards a successful accomplishment of destiny. It is an important preliminary step in the study of any chart that allows us to integrate the other many experiences that occur along the way.

Trauma and the Hellenistic Aspects

This weekend, on August 3-4, I return to Portland to go deeper into the Hellenistic conceptual theory and use of aspects, and will teach the workshop as a hand-on practicum with our own charts. We will explore the psychological application of the techniques with the notion that certain kinds of aspect configurations are one of the indicators of trauma, whether the trauma is caused from past lives or the current life. I would love for you to join us. This weekend and the EA conference in November will be the only two public teachings for the remainder of 2012, here in my home state of Oregon.