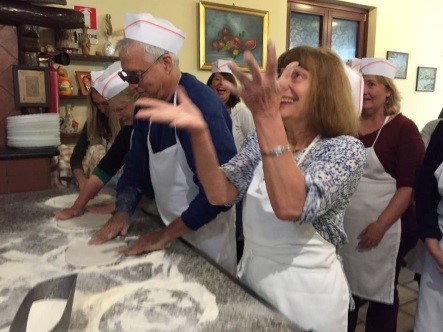 Postcards from a Spiritual Journey in Siren Land

We have all returned safely home from another wonderful Starlotus Sacred Sites Tour immersing ourselves in the mythical landscape of the sirens, sibyls, and ancient seers in Southern Italy.

On one of the two peaks of the island of Capri, Emperor Tiberius passed the last decade of his life with his life-long friend, advisor and astrologer Thrasyllus. Thrasyllus was one of the key figures in the transmission of Hellenistic astrology to Rome, via Alexandria and Rhodes and most likely was a direct source for Manilius’ Astronomica. Our group made a circle at the end of the ambulatio near the Specularium, the astronomical observatory where Tiberius and Thrasyllus would observe the stars and then cast and discuss the charts.

Walking on the footseps of Thrasyllus

We read aloud Thrasyllus’ Pinax as a word offering to one of the ancient seers of the astrological lineage in gratitude for inspiring the current renaissance of traditional astrology.

In an upcoming webinar, I will share the teachings from this day revealing the scope of Thrasyllus’ influence in the power and politics of the early Roman Empire.

Sorrento, famed landscape of the Sirens, was our home base for much of the tour. We discovered that the songs of the sirens were not only songs of enchantment but also of prophecy and higher knowledge luring Odysseus and sailors. In a pristine setting of a churchyard on a cliff above the sea near one of the sites proposed as the ancient temple to the sirens, we circled and spent the hour of the Full Moon reading aloud poems about the sirens followed by a meditation.

Statue of Hera and Pomegranate
excavated from this site

Over the years of pilgrimages to sacred sites, one of the magical experiences that can occur is when the spiritual world of the divine bleeds through and manifests in this temporal world at moments when we are honoring the deities. And it’s wildly exciting whenever it does! Hera (Roman Juno, one of the major asteroid goddesses) was the great goddess of ancient Greece who was brought to Southern Italy in the 8th century by early colonists.

Massive temples to her built in the 6th century BCE still stand at Paestum in prime condition, but her sacred ritual site was at Foce del Sele, about 10 kilometers away, now an obscure and forgotten place that was featured in Gate to the Sea by Bryher – a moving novella of Hera’s last priestess conducting the ancient ceremonies for the renewal of springtime.  As Queen of the Heavens, Hera ruled the moving air, winds, and rain showers. And did she ever pour forth her blessings and acknowledgment of our presence when we arrived.

Amidst blustery winds and rainbursts cascading down soaking us through and destroying our umbrellas, we tromped through the waterlogged marshy meadow to the lone remaining stones of her altar. Statues and hundreds of votive offerings of the Goddess holding a pomegranate, symbol of fertility and regeneration, were excavated from ground under our feet, and we laid a pomegranate on her altar before leaving.

Next stop was up the mountain to the medieval Christian Church of the Madonna della Granata, holding the child and a pomegranate. We saw how the spirit of the goddess simply morphed into another exterior form that better allowed her worshippers to easily continue to access her blessings. As we entered the church, each person was anointed with essence of rose oil derived from the famed twice-blooming roses of ancient Paestum – May you be renewed in body, mind, and spirit. Some our participants were flooded with emotion and past life memories as we sat before the Madonna.

Then onto lunch to the deli café situated right at the Marine Gate of Paestum, now owned by family who for generations have been making buffalo mozzarella cheese from the water buffalos grazing at  their family farm!

Finally in late afternoon we entered the archaeological site at Paestum, where the oldest and best preserved of all the Greek temples still stand in honor of Hera. The wind was still blowing in gusts moving huge white masses of clouds across the sky and golden light filtered down as we walked across the well-tended grass, still-blooming roses, and shading umbrella trees. In front of her temple with the group gathered round, we read aloud an Orphic Hymn to Hera which praised her thus:

You lodge yourself in dark hollows,
and your form is airy,
O Hera, blessed queen of all,
consort of Zeus.
The soft breezes you send to mortals
nourish the soul,
O mother of rains, mother of winds,
you give birth to all.
Life does not exist without you,
growth does not exist without you.
You are in everything,
even in the air we venerate,
You are queen,
and you are mistress.
You toss and turn
when rushing wind tosses and turns.
O blessed goddess,
many named queen of all,
may you come with kindness
on your joyous face.

The Sibyl of Cuma and the Triple Moon Goddess

Temple to Diana of the Full Moon

Our final day was a pilgrimage to Cave of the Cumean Sibyl, an ancient prophetess made famous by the Latin poet Vergil in The Aeneid.  She led the hero Aeneas to the entrance of the underworld at nearby Lake Avernus in order to receive guidance from the spirit of his dead father and was later immortalized by Michelangelo on the ceiling of the Sistine chapel for having foretold the birth of Christ.

Cave of the Sibyl

We discovered a lunar calendar on the the wall of her cave inscribed during the 3rd-4th century BCE. At that precise spot, one can see the visibility of the New Crescent Moon. Higher on the acropolis is a temple to Diana, dedicated and orientated to the rising of the Full Moon shining onto her cult image. We concluded our day and tour with a stop at Lake Avernus, an ancient oracle of the dead under the auspices of the Dark Moon goddess Hekate.

November 2nd is the Italian Day of the Dead where deceased family members are remembered. Each of us offered a pinch of moon incense in memory of those loved ones who had passed over. The symbolism of the triple moon goddess infused the landscape of the Sibyl of Cuma and informed her prophetic words which was mirrored by Hellenistic astrologers naming the Third House “Goddess,” the rejoicing place of the Moon, whose significations included divination and religious rites.