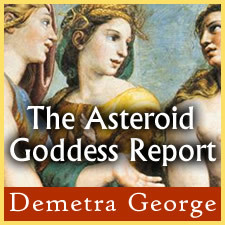 This personalized astrology report is generated using your birth data and based on Demetra George's ground-breaking best-seller Asteroid Goddesses. You'll gain valuable insight into the role of four of the major asteroids in your chart, along with expanded delineations and concepts not found elsewhere.

The first asteroids to be discovered - Ceres, Pallas, Juno and Vesta - form a self-contained symbol system that casts light on issues related to the feminine principle, providing both men and women new insights into areas such as parenting and nurture, career, partners, sexuality and spirituality. After a thorough and informative introduction to asteroids in astrology, the report looks at the four main asteroids in depth. For each goddess, the report includes the essence of her mythical story, her main themes, the life-stage she rules, and delineations of her sign, house and aspects to the rest of the chart. The delineations of each asteroid by sign, house and aspect include conjunctions to the four chart angles and the lunar Nodes, and major and minor aspects to the Sun, Moon, regular planets and other asteroids.

Your Asteroid Goddesses report will be between 40 and 50 pages in length, in pdf format, generated by hand and emailed to you within 24 hours of your purchase (often faster during business hours).

Save this product for later