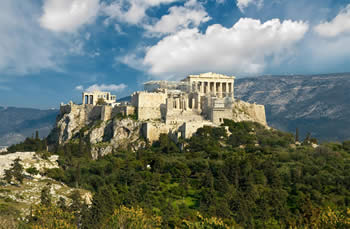 The journey begins in Athens, sacred to Athena, Goddess of Wisdom. We gather in the early evening for a reception, followed by an informal leisurely sunset stroll through the lofty heights of Acropolis where the mysteries of the Arrerphoroi took place. Then we descend into the colorful old city Plaka with its maze of shops to our outdoor garden restaurant to dine together at a local taverna. Dinner included, overnight May 16 and 17 in Athens. Hotel link

The next day begins with a morning seminar on the Eleusinian Mysteries, followed by a visit to Eleusis, the sanctuary of Demeter and Persephone. Their story of loss and return was ritualized in the death/rebirth mystery rites which were held annually for more than one thousand years in the ancient world. We will pause by the Well where Demeter mourned the loss of her daughter, the Cave of Hades where legend recounts Persephone’s abduction into the Underworld, the great Hall of the Telesterion where the mysteries were revealed, and the museum housing much of the art excavated from this site. We will honor the goddess of agriculture by sharing a celebratory luncheon at a taverna adjacent to her site. The remainder of the day is free to explore Athens on your own.

In the morning we visit the Sanctuary of Artemis in peaceful Brauron where the goddess of birth and protectress of young wildlife provided rites to initiate girls into the mysteries of womanhood from before puberty to their first childbirth. We then board a flight to Thessaloniki and proceed to Mt. Olympus where we spend the next two nights. B, overnight Litochoro, a well-watered mountain village situated partly up the highest mountain in Greece.

The next day, after a morning seminar, we immerse ourselves in the dramatic natural beauty of Mt. Olympus National Park, home of the Gods and the Muses.

We will drive up the mountain to Prionia (1660m), picnic by waterfall springs of the Enipeas river, recite Homeric and Orphic hymns to the gods, and explore the mountain trails suffused with springtime wildflowers. For those who wish, there will be an optional one-hour guided downhill hike over streams and through meadows to the ruined monastery of Agios Dionysios.

Today we enter into Macedonia and during two seminars delve into the stories, legends, and mystic rites associated with Alexander the Great and his mother Olympias who spread Dionysian worship throughout Macedonia and Thrace. Our itinerary will include visits to Alexander’s birthplace at the palace of Pella; the school in ancient Mieza where he was taught by Aristotle; and the opulent royal Macedonian tombs at Vergina. We will sit in sanctuary to the Mother of the Gods, the ancient pre-Hellenic goddess sacred to this area and see rare large-scale wall painting of the Abduction of Persephone. B, overnight in Edessa, known for the most dramatic waterfalls in all of Greece.

May 20-22: THESSALONIKI and THRACE

Today’s highlight is a tour of the Archaeological Museum of Thessaloniki. Among the treasures are the astonishing gold artifacts of Macedon; a portrait of Queen Olympias; the 4th century BCE Derveni krater, a monumental hammered bronze urn, marked by its intricate relief carvings of scenes from the worship of Dionysus; and the Derveni Papyrus, an ancient document showing how the beliefs of the Orphic cult prefigured Christianity. We then travel to Drama, a region connected to the earliest worship of Dionysos in Thrace, which will serve as our base for the next several days. In the evening, we attend the opening ritual of the Anastenaria ceremony in village of Mavrolefki. Overnight for two nights in Drama, a city set amidst pure flowing river waters, lakes, and waterfalls.

We spend today exploring the countryside around Drama, known for producing the finest wines in Greece. Myth has it that Dionysus himself introduced the local lords to the secrets of the vine, and that they in later times helped spread its cultivation to the rest of Greece. After a visit and on-site teaching at the Sanctuary of Dionysus in Kali Vrysi, we will explore the Aggitis River Cave and lunch in the adjacent riverside café. Then we offer libations to Dionysus with a wine-tasting at a nearby winery. The peak of our journey culminates tonight during the climax of Anastenaria ceremony. Initiates who have been dancing for several days carrying icons of saints, become ‘enthusiasts’ filled with the spirit of the god and walk over burning coals in order to bring healing to community members. Folklorists suggest that this contemporary ritual carries vestiges of ancient Dionysian worship.

Before leaving Drama, we will look at the finds from the Dionysus sanctuary and the paleolithic artifacts from the Aggitis Cave at the well-appointed local archaeological museum. On our way to the port city of Alexandroupoli, we enjoy a late lunch at the traditional town of Xanthi, which stands at the historic crossroads of Greek, Bulgarian, Gypsy and Turkish cultures. B, overnight in Alexandroupoli

Board the ferry for the three-hour sail to mystical island of Samothrace for the next three nights. The summit of the towering mountain peak dominating this island is where Poseidon “kept his watch” over the Trojan War.

The Samothracian Mysteries were renowned throughout Greek and Roman history and yet still remain enigmatic, a well-kept secret sworn by initiates. After a morning seminar, we will wander through the pristine and spacious Sanctuary of the Great Gods where nocturnal torch lit ceremonies involved two stages of initiation, the myesis and epopteia. Cybele the Great Mother of the mountains worshipped at sacred rocks, the Kabeiroi, Demeter, Persephone, Hermes, Hades, Dionysos, and Orpheus all had cults here.

Our second day on Samothrace is free to explore on your own. You might want to take a boat tour around the island; soak in the sacred hot sulphur healing springs at Therma; hike up Fengari, the highest peak in the Aegean islands; take a more leisurely one hour walk up the Fonias stream with its abundant waterfalls and pools in which you can bathe; go on an excursion to the mountain village of Chora with winding cobbled streets, whitewashed Thracian style houses, local handcrafts and culinary specialties; or swim and sunbathe on the long beige sand beach in the center of the south coast. Overnight in Samothrace for 3 nights.

May 26: SAMOTHRACE and ALEXANDROUPOLI

We take a late afternoon ferry back to Alexandroupoli where we rest overnight at our elegant seaside hotel.

Return to Athens on an early morning flight. For the final day of our journey, we stay at a beachfront hotel situated at the southernmost tip of Attica at Cape Sounion. Here we can swim in the small cove of a clear deep blue sea, sunbathe and integrate the energies of heightened awareness gained during our spiritual journey. At sunset, we will visit the temple of Poseidon perched on the cliffs above, followed by farewell dinner at a seaside restaurant.

You can arrange transportation to the airport (35-minute drive) or back to Athens (1 hour) if you want to continue the Greece adventure on your own.